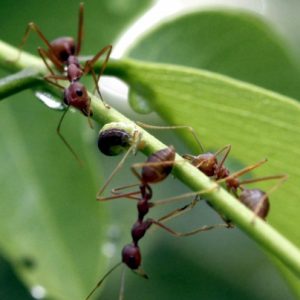 Many residents of Guam are familiar with ants and their many shapes, sizes, and colors. Before you can effectively eliminate these well-organized intruders, you must understand how they operate.

Ant Colonies and the Weather

While ants can be easily found throughout the year, they are particularly noticeable during certain seasons and times on the island. Hot and extremely dry weather can sometimes initiate swarming activities with some species, as will inclement weather. During hot and dry periods of weather, the conditions are advantageous for drones and young queen ants to become airborne. With a lack of moisture, peak opportunity arises for them in order to fly far away and start new ant colonies. During heavy spells of rain, the ground is often saturated with water, thus forcing the entire colony to retreat to high and dry places.

For most ants, those high and dry places often translates to buildings and residences. Ants form highly complex social colonies and form search parties and scouting missions in order to find food sources. During these scouting missions, worker ants roam about the area, searching for food to bring back to the colony.

When a worker ant finds a food source, others are able to find the same food source via a chemical scent trail they leave behind for others.

Currently, the most notorious of all the ants found on Guam are known locally as “red ants,” which are aptly named because of the dull red/orange tinge they have on the majority of their exoskeletons. What island residents know as red ants are known around the world as tropical fire ants, and are known in the scientific community as Solenopsis Germinata. The center for diversity of the Solenopsis Germinata group is located in South America and consists of several closely related species. Red ants, or tropical fire ants, are known to prefer areas with little to no overgrowth, such as a residential yard or sunny, open fields. Many Guam residents have experienced the painful sting of a red ant, which can leave painful welts on sensitive individuals. Red ants are also known to kill young pets and other such animals by overcoming the young with their massive, stinging numbers.

The Trouble with Symbiotic Pests

Ants are known to form symbiotic relationships with various insect pests. Symbiotic relationships involve two or more species in a relationship, with all members receiving some form of beneficial reciprocation. Among the insects which form such relationships with ants are scale, mealy bugs, white flies, psyllids and aphids. Insect pests are problematic to food crops and ornamental plants, and can devastate a field of crops, or your favorite plant if left unchecked. All these insects, especially aphids, are very attractive food sources to ants.

Aphids, in particular, are known to spread diseases, bacterium, and viruses from plant to plant.

Protect Your Plants While Destroying Intruders

To combat these insects, Integrated Pest Management systems are always a good preventive measure to incorporate into your growing routine. The harmful insects mentioned feed on the sap of trees and shrubs, and then secrete sweet substances, which the ants consume. This secretion, called honeydew, is what the ants harvest, or “farm.” In this particular symbiotic relationship, the ants receive food and the insects receive protection from predators. Here on the island, aphids in particular are known to spread diseases on citrus, bananas, papayas, cucumbers, tomatoes, etc., and cause leaf malformation problems on young leaves if their numbers remain unchecked during the growing phase. Insect honeydew secretions also can cause the growth of black sooty mold on leaf surfaces, diminishing the amount of beneficial sunlight your plants receive. With reduced sunlight levels, your plants may weaken in time and become susceptible to disease and exhibit deficiencies.

During the main growing seasons and periods of wet weather, some trees and shrubs tend to display strong growth patterns, due to the abundance of moisture and humidity. With excessive growth patterns, the potential for harmful insects to flourish increases because of an abundance of fresh, new growth. A general lack of predation pressure, pest management practices, and an abundance of food will favor a proliferation of insect pests and create unfavorable growing conditions for your plants.

In order to reduce the potential for ants and other such harmful pests to set up shop in your garden, try to create a hostile atmosphere or conditions which they find unfavorable.

When choosing and purchasing plants, start with healthy, disease free plants. A healthy plant is more capable of fighting off pests and diseases than that of a weak plant. Carefully look over the undersides of the leaves and stems for pests, signs of disease, and fungus. Lift the pot and check for signs of ant activity, which might indicate the presence of an ant colony within the pot. When you eliminate food sources and insects which ants form symbiotic relationships with, the chances of you inadvertently bringing home ants and problematic insects into your home are greatly reduced.

Aside from the elimination of food sources and pests which ants are attracted to, there are other measures you can take to ensure ants are not attracted to your garden. Natural solutions used to discourage or eliminate ants include:

These recommendations can be applied to both the harmful insects as well as the ants directly.

Standard commercial chemical insecticides used to control ants are all readily available at your local hardware stores, should you choose to go that route. A quick rundown of pointers to keep in mind when dealing with ant removal are eliminating sources of food, eliminating insects with which they form relationships, and enforcing integrated pest management measures. Be sure to carefully inspect new plants, soils, containers, and other such materials for ant colonies and harmful insect infestations before you bring them home. Ants will move into areas they find favorable and welcoming, either for food or shelter. They also are attracted to certain harmful insects, which they use as food sources.

With the elimination of those harmful insects, and the various attractant factors listed above, they will find your yard and garden inhospitable, and find refuge and food elsewhere.