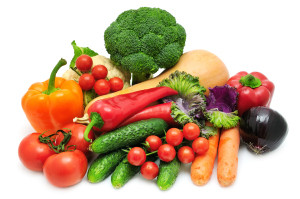 I saw the display table for this new program at the Mangilao Thursday Night Market last night. They had samples of their vegetables, eggs, and fruit on the table. The calamansis appeared very large and perfectly ripe. The eggs were about the size of an average large egg found in grocery stores. The various lettuces and greens displayed were dark and crisp with very full leaves. They even had kale on display, which is something I miss from the mainland. I believe the representative I spoke to assured me that everything was organic, but it doesn’t mention that in the information handout I received.

Much like the Community Supported Agriculture programs throughout the U.S. and Canada, you can’t specify your fruit and vegetable requests. The produce that’s in season and fresh that week is what shows up in the weekly delivery, and it not only varies by season but often from one week to the next. However, members will receive an email in advance to give an idea of what to expect that week, so that meals can be planned accordingly.

The deliveries will be available for pick-up at the Mangilao Night Market on Thursday evenings between 5:00-7:30, for those members who have signed up in advance. The representative I spoke to indicated that they hope to expand to other local village markets. If members aren’t available to pick up their share at the market that week, they may designate someone else to pick up for them. The representative I spoke to was eager for suggestions and feedback at this early phase of the pilot program, in an effort to learn how the program might best be tailored to suit the needs of its potential members, in order to make it a success.Farm-to-Table-logo

For more information, call Farm to Table Guam at 671-647-0100, email info@farmtotableguam.org, or visit their booth at the Mangilao Night Market on Thursday evening.