The 2016 Calls for Proposals for four Western SARE grant programs have been released. Descriptions of each program and links to the full Call can be found here. 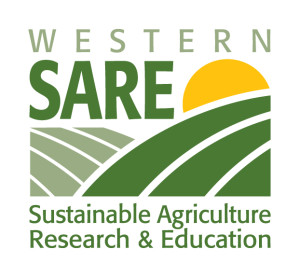 The four grants programs include:

Research & Education projects involve scientists, producers, and others using interdisciplinary approaches to address issues related to sustaining agriculture. Pre-proposals are due 1:00 p.m. MDT on June 3, 2015. Following scrutiny by a technical review panel, presenters of the best pre-proposals will be asked to submit full proposals, due in November 2015 with notification in March 2016.

Professional Development projects focus on training agricultural professionals to help them spread knowledge about sustainable agriculture concepts and practices. Proposals are due noon MDT, October 28, 2015 with notification in March 2016.

Farmer/Rancher projects are conducted by agricultural producers with support and guidance from a technical advisor. Producers typically use their grants to conduct on-site experiments with results that can be shared with other producers. Multiple farmers or associations may qualify for a higher level of funding. Proposals are due 1:00 p.m. MDT, December 2, 2015 with notification in March 2016.

Professional + Producer projects are similar in concept to the Farmer/Rancher Grants with a few key differences. Instead of a producer serving as the project coordinator, an agricultural professional coordinates the project. Farmers or ranchers serve as project advisors. Proposals are due 1:00 p.m. MDT on December 2, 2015 with notification in March 2016.

The 2016 Call for Proposals for the Graduate Student Grants has previously been released and proposals will be accepted until 1:00 p.m. MDT on May 13, 2015. Successful applicants will be notified in August.

The Western SARE Administrative Council will select reviewed proposals that are innovative, diverse in content, subject matter, and geography; demonstrate tangible outcomes; and provide readily adaptable technologies and information suitable to the adoption of sustainable farming and ranching systems by producers in the western region.